RETURN TO IRELAND WITH 2020 TOUR

We’ve got an awesome gig announcement for you to kick start your weekend!

Guns N’ Roses are back to our Paradise City and will play Marley Park SATURDAY 27 JUNE 2020. Tickets go on sale Wednesday 18th December at 9am. You can get them here.

The band that shook Slane Castle and the world with their historic return in 2017, Guns N’ Roses have announced dates for 2020 – the next step in their phenomenal career.

Returning to Europe for the third time since their Not In This Lifetime tour kicked off in 2016, Guns N’ Roses have performed their endless run of hits with 160 shows for over 5.5 million fans in stadiums, arenas, and as part of festivals worldwide. The European dates in 2017 and 2018 alone brought the mind-blowing stage show to over 1.6 million fans. Produced and promoted by Live Nation, the Not In This Lifetime tour became the third highest grossing tour of all time. 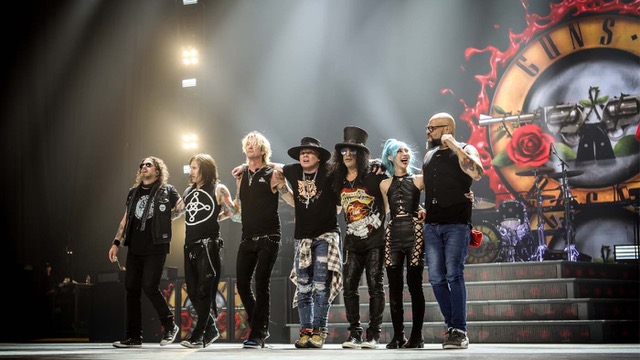 Following the group’s 1985 formation, Guns N’ Roses injected unbridled, unrivalled, and unstoppable attitude into the burgeoning Los Angeles rock scene. The spirit went on to captivate the entire world with the release of their 1987 debut Appetite for Destruction –the best-selling U.S. debut ever, moving 30 million copies globally.  In 1991, the seven-time platinum Use Your Illusion I and Use Your Illusion II occupied the top two spots of the Billboard Top 200 upon release. Over the course of the past decade, Guns N’ Roses have performed sold out shows and headlined festivals worldwide following the critically acclaimed release of 2008’s RIAA platinum-certified Chinese Democracy. Six studio albums later, Guns N’ Roses are one of the most important and influential acts in music history and continue to set the benchmark for live performances connecting with millions of fans across the globe. Since reuniting in 2016, Guns N’ Roses has gone on to sell over 5 million tickets worldwide on the Not In This Lifetime Tour.  Guns N’ Roses’ are Axl Rose (vocals, piano), Duff McKagan (bass), Slash (lead guitar), Dizzy Reed (keyboard), Richard Fortus (rhythm guitar), Frank Ferrer (drums), and Melissa Reese (keyboard)